We are going to turn our thoughts now to the third and final chapter under the doctrinal section of the letter to the Ephesians. It is a chapter that falls into four main themes:

What  we will be uncovering, as we go through each of these sections, are not only some fascinating spiritual truths but also some interesting insights into Paul the man and his unique calling from God.

Paul’s concern for his readers:

As we read through the opening verses of the chapter we discover that verse 2 does not follow on logically from verse 1. Having begun the chapter with a reference to his being a prisoner of Christ Jesus, Paul suddenly jumps into the theme of the mystery of Christ in verse 2. It is only several verses later, in verse 13, that Paul again seems to pick up on the theme of his personal suffering. We shall be returning to the theme that emerges in his digression, but for now we shall focus on verses 1 and verse 13.

There can be little doubt that Paul was a man who possessed a keen mind and a remarkable depth of spiritual perception. However, he also possessed a heart of a true shepherd of God’s people who had been brought into the fold through his ministry. I find it particularly interesting as well as challenging that even in the midst of his own discomfort at being held prisoner his concern was not for himself. It was for those who might be affected  by what had happened to him. What would be going through the minds of his readers as they thought of Paul in prison? If God was as loving, gracious and powerful as Paul had made out , wouldn’t some of them be wondering why such a God would allow His servants to suffer? Could they be thinking that the Kingdom of God was really no match for the power of Rome?

Perhaps these were some of Paul’s concerns at what his readers might be feeling as they tried to reconcile the Gospel of grace with Paul’s imprisonment. Whatever it was that they might be feeling at Paul’s imprisonment Paul wanted them to be reassured. He wanted his readers to know that he did not regard himself as a prisoner of Rome. Life on this earth is not composed of a series of haphazard events dictated by the vagaries of chance and the political powers of the day. Paul never saw himself as a victim of his circumstances. In Christ he was a victor, an overcomer who knew that through whatever he had to face Christ remained in control of his life. He wanted his readers to see his life as a witness to the power of the Gospel of grace and not a distraction from it.

“For this reason, I, Paul, the prisoner of Christ for the sake of you Gentiles (vs.1)….I ask you, therefore, not to be discouraged because of my sufferings for you which are your glory (vs. 13).”

It isn’t easy to face many of life’s problems with composure and an unswerving confidence in the sovereignty of Jesus Christ, is it? When our professions of faith are put to the test we are often dismayed at how easily we seem to slide into negativity, self-pity or self-condemnation. How quickly we seem to lose our composure. “Why me? Why does this have to happen to me at this point in my life? Why doesn’t God hear my prayer and get me out of this mess?”

I don’t want  us to think of Paul as some kind of super-hero or a paragon of Christian virtue. Equally it would be a mistake to think that his attitude towards his circumstances were simply a display of stoical resistance or passive resignation. Why, then, was he able to remain so Christ-centred, so Christ-focused even in his suffering?

Knowing what he had been before encountering Jesus Paul could never forget what Jesus had done for him to make his reconciliation with a holy God possible. Against the background of the overwhelming magnitude of God’s grace and the privilege of God’s calling upon his life, anything he might have to sacrifice was insignificant in comparison. How Paul must have longed for his readers to know what he knew, to experience what he had experienced and to live at that same level of trust in the goodness of God.

Knowing what the Bible teaches about Jesus and salvation in our heads without knowing that truth in the inner core of our being doesn’t  make for that knowledge to be translated into practical action nor does it give us the faith of an overcomer. Having our eyes and ears opened by the Spirit of Truth may not always ease our pain and discomfort when we are in one of life’s deep valleys, but it will help us to remain, as Paul did, Christ-focused. ”I, Paul, a prisoner of Jesus Christ!”

They that trust in the Lord are secure,
Tho’ the storm rages dark o’er the sea;
For this anchor of promise is sure
”My grace is sufficient for thee”.

They are probably very familiar passages to you. However, they provide a very important and useful background to what we shall be looking at in the reflections that are to follow.

If you have a question or a comment about this series please feel free to write to me, Brian, at

Verse of the Day

“Godliness makes a nation great, but sin is a disgrace to any people.” — Proverbs 14:34 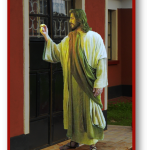 Getting to Know Jesus - a ten day biblical journey of faith and discovery.